On average, younger female athletes have at least a six to eight times greater risk of experiencing an ACL tear than their male counterparts. There are several reasons behind this increased risk—one of the most significant being differences between female and male anatomy. These differences can be divided into “static” anatomic and “dynamic” biomechanical factors. 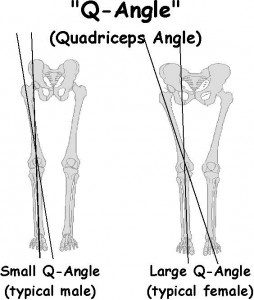 Some of the static differences that women have from men are wider pelvis, greater hip varus, increased femoral anteversion, knocked-knee, and external tibial rotation. Overall these differences lead to internal rotation and adduction of the thigh when landing after a jump, which creates more strain on the ACL. Furthermore, the Q-angle (the angle measured between one line drawn from the anterior superior iliac spine through the central patella, and a second line drawn from the central patella to the tibial tubercle) is 3° to 6° greater in women compared to men.

This increase in the Q-angle has been hypothesized to increase the lateral pull of the quadriceps, making the ACL more vulnerable. In addition, females tend to have a narrower intercondylar notch, which predisposes to increased ACL injury risk.

The biomechanics of the lower extremities change as a result of all of these anatomic differences. In general, females tend to have a more upright posture with less hip and knee flexion. When females land from a jump or a stride, they tend to have more valgus loading, or twisting away from the midline of the leg, than their male counterparts, causing increased strain on the ACL. 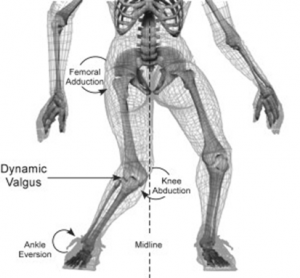 Females often twist further away from the midline of the leg than males when landing, thus creating more stress on the ACL (http://www.medbridgeeducation.com/blog/tag/acl-reconstruction/)

The hormonal differences between female and male athletes also play a role in the risk of ACL injuries. A majority of ACL injuries occur in the follicular phase, as known as the time period after ovulation and before menstruation. Fibrobloasts in the ACL have specific receptors for estrogen and, when stimulated, decrease fibroblast collagen synthesis, thus reducing ACL bulk and strength.

After six weeks of implementation of the PEP program in a study, the risk of ACL injury decreased by 88% within the first year, and 76% in the second year when compared with patients who did not undergo training. A meta-analysis discovered three key interventions that had the most impact on decreasing the risk of ACL tear: plyometric training, balance and core training, and strength training [Hewett].

Overall, it is clear that greater awareness of the anatomical and biomechanical differences between women and men can help draw more attention to the risk female athletes face. A focused prevention program is vital to any female athlete’s regimen for lowering the risk of ACL injury and significant time away from training and competition.